What is a HAST test? 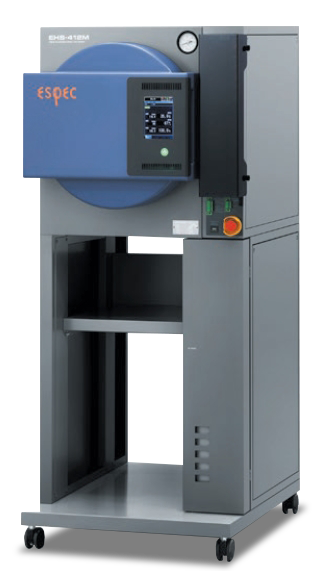 Today, typical humidity testing can take thousands of hours to get appreciable results. The quality of Integrated Circuits (ICs) is such that they are not prone to failure during humidity tests. Failures are caused by moisture vapor penetrating the “packaging” or “encasing” of the actual silicon circuit.

In order to accelerate the penetration of moisture, Highly Accelerated Stress Test methodology was founded.

History
It started with a simple Sears pressure cooker, but has been well-refined test over the last 25 years. Parts were placed on a shelf above water in the pressure cooker, allowing them to be exposed to high humidity levels above normal boiling temperature. Because the pressure cooker is sealed, it avoids steam-cooking your samples. However, because there was little consideration for uniformity and condensation damage, test data was unreliable and potentially false.

Over the years, the IC industry has found reliable acceleration factors with HAST testing, reducing weeks of humidity testing to just hours, with the same results.

Benefits
Modern HAST chambers like ESPEC’s have been designed to let you accurately control the temperature and humidity settings. One of the most critical aspects of HAST testing is the cool-down process. If the chamber is cooled to fast, or pressure is released prematurely, there is a risk of condensation or pressure shock on the samples, ruining the test. ESPEC has perfected it’s cool-down process, including an option to hold the samples at 85°C/85% until unloaded.

Acceleration factors vary depending on the sample, but huge savings can be made. Typical reductions of test time to 1/50th of a standard humidity test are normal. Some people are now starting to try combining HAST with other methods, to increase the results. For example by using HALT (Highly Accelerated Life Test) methods of fast temperature cycling and random vibration, they hope to aggravate faults in parts so that when they do a HAST test, the humidity can penetrate better.