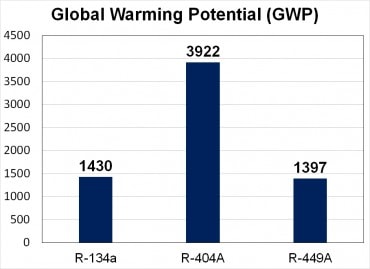 Starting in 2018, ESPEC will begin to phase out R-404A refrigerant in new equipment we build. This change is in compliance with worldwide regulations and to lessen our chambers’ potential environmental impact.

In 2015, the European Union updated its fluorinated greenhouse gas (F-gas) regulations. This update seeks to further reduce the environmental impact of HFC refrigerants through restrictions and phase-down dates. This change is also impacting the worldwide marketplace.

Hydrofluorocarbons, or HFCs, are energy efficient, non-flammable and ozone safe refrigerants with a low toxicity. HFCs are the most common F-gas family of chemicals. HFCs, however, pose a threat to the environment due to their relatively high Global Warming Potential (GWP).

The F-gas regulations originally focused on the reduction of emissions through leak prevention and enforcing responsible recovery and destruction of HFC refrigerants. The updated EU regulation (514/2004) restricts the manufacture and sale of new HFC based products and equipment, as well including stricter rules to limit production of HFCs themselves.

Almost all ESPEC chambers use HFC refrigerant R-404A, which has a GWP of 3902. In the regulations, chamber applications are described as —

Stationary equipment containing f-gases with GWP of 2500 or more except intended for applications designed to cool products to temperatures below -50°C.

This means that ESPEC chambers with single-stage refrigeration circuits that go to -40°C will have to meet a cutoff date of January, 2020. Cascade refrigeration systems that use R-404A and R-508 have until 2030, due to their low operating temperature of -70°C.

Usual servicing of ESPEC chambers containing R404A will be possible past 2020. However, production phase-out and waning availability will require an increased use of reclaimed or recycled gas. Customers do not have to modify or retrofit their equipment.

ESPEC will completely replace R-404A with hydrofluoro-olefin (HFO) R-449A in single-stage and cascade systems. This gas is a close performance match, and meets the regulation with a GWP of 1397 … a 64% reduction over R-404A. The new refrigerant is also more energy efficient.

The vapor pressure of R-449A is higher, resulting in a reduction of our lowest temperature to -35°C for single-stage chambers. There will be negligible impact on our cascade refrigeration performance or low temperature.

R449A is a ‘drop in’ substitute for R-404A, expanding options for extending the life of existing equipment well past 2020. Tuning of the system would certainly need to be completed after any retrofit. ESPEC will be developing replacement guidelines in the future.

ESPEC is dedicated to reducing the environmental impact of our equipment through energy conservation, responsible handling of potentially hazardous substances, and adherence to regulations.