What is an expansion valve?

ESPEC’s reach-in and walk-in chambers feature electronic expansion valves (EEV’s)—the first and only chambers in North America to do so. Let me explain what an expansion valve does and why an electronic type makes for a better chamber.

An expansion valve is used in a refrigeration circuit to change the coolant from a compressed liquid to an expanded gas. As it changes state, the refrigerant draws energy, causing a cooling effect. (For more about how refrigeration works, see How Stuff Works.)

Unlike most refrigeration applications, test chambers also include electric heaters to control the temperature, sometimes even when the refrigeration is on. 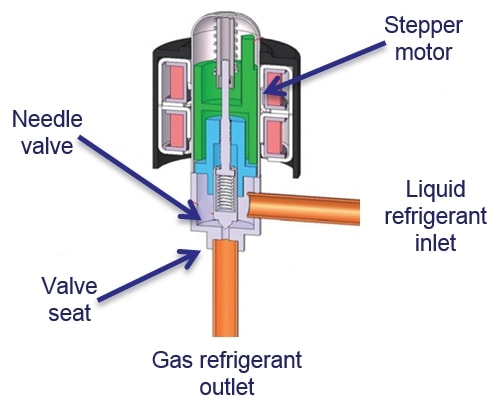 1. Environmental chambers typically use a thermal expansion valve (TXV) that is adjusted depending on feedback of the expanded refrigerant pressure and/or temperature. The control range is limited, and often the main coolant solenoid is also used to turn the circuit off temporarily in order to maintain the desired chamber temperature.

2. For smaller or simpler refrigeration systems, a capillary tube can be used for coolant expansion. The diameter of the capillary tube is selected to optimize cooling for that specific circuit. In this case, heating is used to help adjust to the desired temperature. A “cap tube” provides for fine control since there are no sudden blasts of cooling, but can limit performance, and is not especially efficient.

3. An electronic expansion valve (EEV) is the best of both worlds. The opening of the valve can be adjusted quickly and with greater range. A stepper motor is used for incremental adjustment of the refrigerant based on input from a system controller monitoring the air at the cooling coil. A PID control system specialized for EEV operation is required.

Benefits of an EEV:

When using an EEV, the result is a more reliable and efficient test chamber. ESPEC SCP-220 and P-300 programmer/controllers have unique Balanced Temperature (and Humidity) Control (BTHC) logic to take advantage of the fine control and energy savings of electronic expansion valves. The new P-300 controller includes the ability to control both single-stage and cascade refrigeration circuits via EEV.