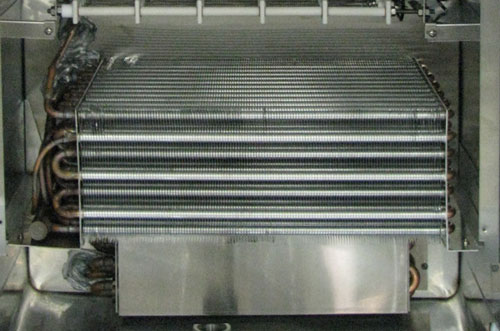 Nearly every humidity chamber should have refrigeration or some cooling method to ensure humidity control. Relative humidity varies with temperature, so a stable temperature is required. The refrigeration in most humidity chambers also has a separate dehumidification coil to attract moisture. The moisture collects on the coil, where it condenses and drains out of the chamber, thus dehumidifying the chamber. The coil is set to stay above freezing to avoid becoming covered with ice.

De-humidification via refrigeration is standard on test chambers and can get relative humidity down to 10% at higher temperatures. For situations where even lower humidity is needed, there are three typical methods: 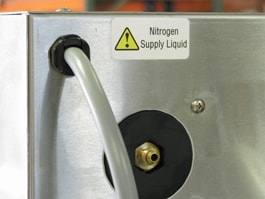 Nitrogen gas does not hold moisture, so it is naturally dry. By slowly bleeding nitrogen gas into the chamber, moisture-laden air is pushed, or purged, out of the chamber. Carbon dioxide is not a dry gas and isn’t suitable for this application. Nitrogen should not be used in chambers where people may go inside. 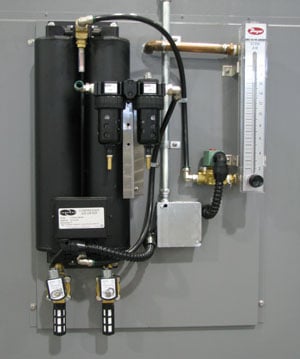 A dry-air purge system is more common than nitrogen. External compressed air is fed into a desiccant dryer system before being used to purge the chamber air.

(A desiccant is a substance that easily absorbs moisture, like the silica gel crystal packets you find packaged with some products.)

The dry-air purge system doesn’t need much maintenance. The system uses two desiccant “towers”. One dries the compressed air while the other tower is vented to the room to allow it to regenerate. You will often hear these systems “pop” a little compressed air while switching between towers. The desiccant can be used for years before replacement desiccant is needed.

Larger chambers are impractical to dry with nitrogen or compressed air. Instead, the chamber air is circulated to a desiccant for drying, before being returned to the chamber. The desiccant is in the form of a honeycomb wheel, where part of the wheel is being vented to the room to release moisture. These systems typically heat the air to make it easier to capture moisture, and will also have a cooler so the air will return at a controlled temperature that doesn’t impact the chamber operation.