Why is airflow important?

When considering a new test chamber, you may be concerned about airflow speed? How fast should it be? Most test specifications don't say much on this subject, which makes it even harder to decide. In some cases low speed is acceptable and/or desirable, and others high speed is better. 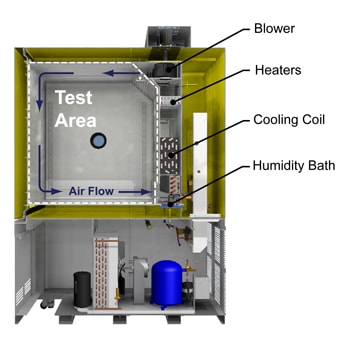 Test chambers need to circulate the air so that it can pass over heaters and coolers, ensuring a uniform air temperature. This is called "forced convection". You may think that "natural convection" is better to simulate real-world conditions, but it doesn't make a difference in most cases.

We sometimes run into confusion between the terms FPM (linear feet per minute) and CFM (cubic feet per minute). FPM is calculated by taking the CFM and dividing it by the cross-sectional area that it will be blowing through. CFM numbers can run very high, but when reduced to FPM, the actual air flowing past your product may not be as extreme as you thought it might be. For this reason, limiting the chamber size and cross-sectional area are important criteria for true ESS applications.